CalTopo's MapBuilder Layer uses data from Open Street Map for much of our trail, roads, and features data. Open Street Map in it's About Page describes themselves this way; "OpenStreetMap is a free, editable map of the whole world that is being built by volunteers largely from scratch and released with an open-content license." You can become one of those volunteers and edit errors you might find on any product including MapBuilder Topo that uses OSM as a resouce.

Topics on this Page:

Editing Base Layers That Use OSM Data

For some of our base layers, you can edit the source data and see it reflected on CalTopo. For example, the data driving MapBuilder trails, roads and other features is largely pulled from OSM, which is a crowdsourced compendium of mapping information. OSM users can upload GPX tracks, draw trails, label features and more. If you see a mistake or omission, it is possible to make edits to the map itself. You will then see your edits on CalTopo when we update our data, approximately quarterly.

To edit the OSM information you'll first have to go to the OSM website. Once there you can make edits in a number of ways but there are two simple methods. The easiest and the one that does not require you to create an account or sign in is creating a Note. This relies on other OSM contributors to do the edits. This can work for naming errors or if a trail or road is just not there, it wouldn't work as well if you wanted to relocate an existing trial or road, or add a feature. 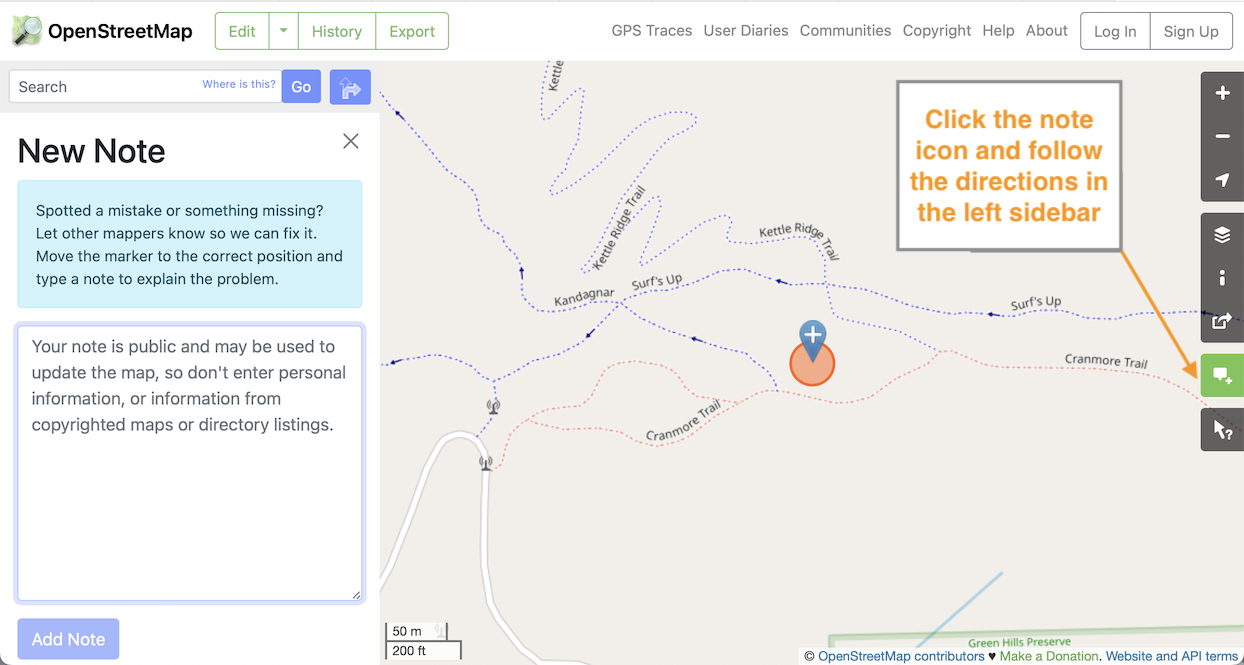 Putting a note into OSM.

The second way will require you to create an account and sign-in. Once signed-in you can edit the map and your editing power is equal to someone with hundreds of edits. The best beginner editor is iD, here is some info on OSM iD. Of course there are people who have contributed enormously to OSM and they will quickly see your changes and re-edit them if they are wrong, low quality, or inappropriate and if they are malicious you will be blocked from making edits. There are algorithms at work as well that check changes to stable features, naming of features, and odd shapes etc. We encourage you to first go through the walk through of the iD editor at OSM and only make changes that you are very familiar with.

Learning how to edit features with OSM iD.

If you want to learn more about the accuracy of maps, check out this blog post that delves deeper into the subject.